Impressions: A Week with Fujifilm X-Pro1


The X-Pro 1 is Fujifilm's flagship X-Series camera.  Through Gulf Photo Plus and Fujifilm ME's loan program, photographers residing in UAE and a few, like myself, in nearby countries had the chance to try out Fuji's X-Series cameras.  I borrowed the X-Pro 1 together with 3 prime lenses - 18/2, 35/1.4 and 60/2.4 to find out if an all-Fuji system would suit me and eventually . . . huh . . . if it's possible to migrate from DSLR to Fuji mirrorless.  Why not Sony?  Or Olympus or Panasonic?  I don't know but they just don't appeal to me.  I was looking at Sony's NEX-6 and 7 but couldn't make myself to like their user interface.  The Fuji's look more like a viable "pro-camera" in a small package.

To me, this is THE professional photographer's mirrorless interchangeable system.  You don't have to be a genius to figure this out.  I showed my X100S and the X-Pro 1 to the people around my office and no one, at all, was impressed.  They all thought of them as old-fashioned cameras.  I showed a teaser photo and status updates to the people in our photo club and everyone was excited to see it, touch it and play with it a little.  And those were just teasers.  See what I mean?

I will not discuss here at length about its image quality because nearly any camera out there today is capable of producing incredible images.  The difference is so small that you'll really need a microscope and some scientific experiment to distinguish the small differences between them.  Images made from the X-Pro 1 are very good, that's all I can say.  As good as the other reviewers have already said many times before.  They can match with the best DSLR's out there, including those with full-frame sensors.  As with my X100S review, here's a sample photo and a 100% crop and you pretty much judge for yourself if it's good enough for you or not. 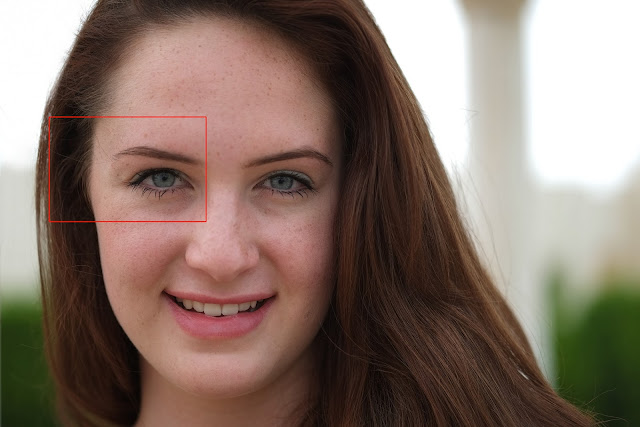 What I will discuss here is more of the user experience, how it fits to my needs and shooting habits.  First thing I noticed was how light it was and how all 3 prime lenses and the camera body fitted in one small shoulder bag with room to spare for my X100S.  So I decided to shoot for the rest of the week with just these 2 cameras and give my Canon EOS 7D a vacation - no flash and strictly jpeg.  I already know that it performs really well in high ISO so I didn't had any second thoughts shooting in aperture priority mode with Auto ISO adjusting by 1 stop up or down as necessary.  I found this way of shooting rather liberating and intuitive.  It allows me to simply SEE, aim the camera and shoot.  Having said that, it was like point-and-shooting - but - with conscious awareness of what the camera is doing.  On that note, I enjoyed shooting with the X-Pro 1.  You could probably do the same with DSLR's that are better than my 7D (there are not many of them out there) but like I said, this assessment was based on my own personal experience. 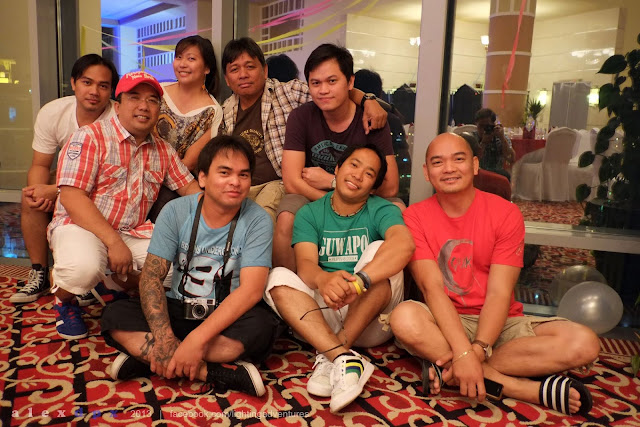 As good as it is for ambient light shooting, however, I am still a lighting photographer.  I wanted to know how it works with my lighting setups.  So I invited a friend, who is a poi dancer, for an evening of photoshoot session.  He would just love to have some new photos for promoting himself.  We agreed to do the shoot at the Doha Corniche with the city's skyline as background.  At night, I did not had any sync problems because we were shooting at 1 and 2 seconds most of the time.  However, my subject, Arman was dark against the brightly lit buildings along the Corniche.  The camera struggled to maintain focus on the subject.  It had tendencies to back focus a lot of times.  On that aspect, my EOS 7D DSLR proved to be better.  But still, we managed to produce some pictures we can be proud of.  By the way, these shots were handheld with a monopod only for vertical support. 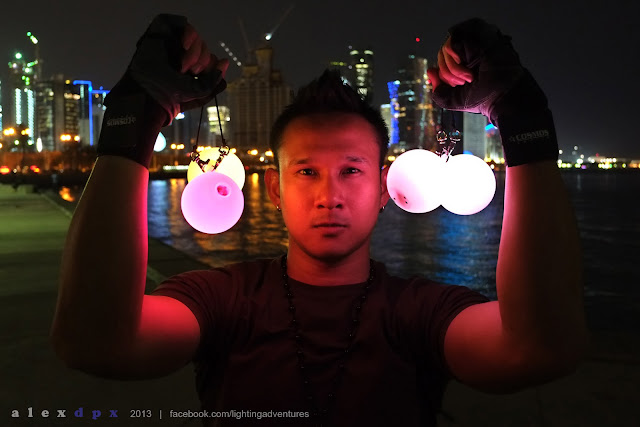 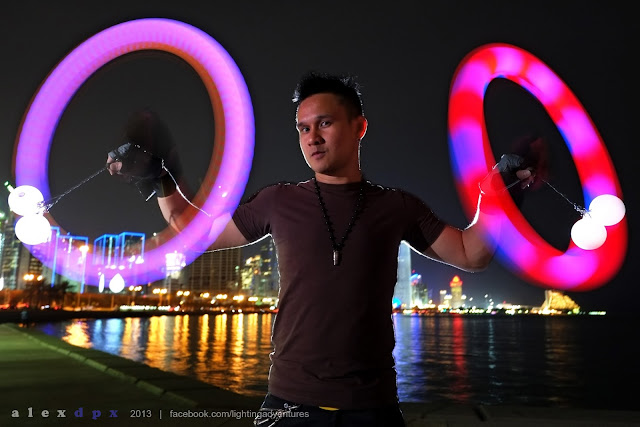 On another photoshoot, we had two young ladies for a portrait session.  This was scheduled on a Friday morning and I was hoping to really challenge the X-Pro 1 for some daytime strobing under bright sunlight.  When the day came, it was overcast and with light showers even.  It was not particularly bright that day and yet the X-Pro 1's 1/180 max. fss was not enough to do the pictures I wanted.  1/180 is giving me small apertures which means a lot of depth of field.  I wanted to shoot wide open at f/2.  So I used it mainly to shoot close ups with available light.  It was an overcast day anyway and there were no harsh shadows.  Overall, the results were up to expectations as well.  But the slow fss was rather a let down.  I have already sent a message to Fujifilm ME that if the "X-Pro2" or "X-E2" is currently in development, their engineers should consider improving this.  But thinking about it, just about every mirrorless camera out there can't go faster than 1/180 so it's not a negative point for the X-Pro1.  I just with Fuji could improve on it.

Like the X100S, it's somewhat different from a DSLR.  It's got a really awesome hybrid viewfinder though, and to me, that alone justifies the extra price.  Come to think of it, most mirrorless cameras' EVF are sold separately.  In this Fuji (and the X100S) you're getting 2 for the price of 1 (OVF + EVF) and both of them are very nice and well implemented.  In EVF mode, I suppose it's similar to other EVF's found in other mirrorless systems - built-in or optional.  In OVF mode, you get a bright view of the world - it's bright and beautiful!  (Seriously, that OVF on the Canon Powershot G's are a joke.)  It may feel strange to most.  Composing with it is different because you are not looking through-the-lens and you are guided simply by rectangles and boxes.  It takes some getting used to but it works just fine.

Size and weight are it's most distinctive advantage over a DSLR.  Figure this . . . a 2-body DSLR, 3-lens setup requires a backpack to carry them around.  The same setup, Fujifilm X-Pro1 with 3 of its prime lenses + an X100S will fit in a small shoulder bag.  Two DSLR bodies hanging on each shoulder is heavy and quite cumbersome to move around with.  An X-Pro1 and an X100S on each shoulder feels close to nothing.

And there is something about the knobs and dials when adjusting your aperture and shutter speed as compared to buttons, menus and wheels of the DSLR.  It's a very basic way of working but it's also very intuitive.  You can make the adjustments by feel . . . I don't even know how to explain that but yeah, you feel it, you don't think of it.

But the camera is not without its quirks.  AF is rather slow and has tendencies to back-focus.  The viewfinder could use a dioptre adjuster, as in the X100S.  Body construction, while very well-built need to have some degree of weather sealing.  And the bane of all X-Series cameras . . . poor battery life.  Yeah, yeah, I know . . . buy more batteries.

AM I READY TO MIGRATE FROM DSLR TO FUJI X?

The X-Pro1 and X100S is a very compelling combination and an enjoyable pair to shoot with.  Both cameras deliver stunning results straight out of camera and in JPEG.  The quirks are minor inconveniences and things that I can get used to.  Actually, it doesn't take that long to get used to most of them.

It's the price that's breaking the deal for me, I just can't afford it at this time.  It costs almost as much as a Canon EOS 7D also with APS-C sensor, weather sealing, better AF (much better AF), with faster (much faster) continuous frame shooting and a much wider variety of system accessories and support.  I don't know what drives that price up - is it the exquisite craftsmanship?  Or the hybrid viewfinder?  Or the unique sensor?  Or simply the way it inspires passion and desire?  I think I'll hang on to my EOS 7D for now.

I still have some shooting requirements that the Fuji's system cannot meet (at this time).  The X-series cameras are still not fast enough for sports and the range of lenses are not yet up to par with what is available for a Nikon or a Canon system.  They are slowly getting there, though.  On top of my Fuji lens wishlisht - a really good and fast portrait lens between 85 to 135 focal length.  Interestingly, while an X-series camera along with their accessories can be considered as expensive, Fuji XF lenses are rather reasonably affordable.

Fujifilm did an excellent job on addressing a majority of complaints on the X100 by introducing a much better, near perfect X100S.  I believe that the same improvements will be implemented on the "X-Pro2".  I can only imagine now how awesome that camera is gonna be.  They could probably add a dioptre adjuster to the viewfinder so we don't have to buy those accessory correction lenses.

The day will probably come when I will fully migrate from a DSLR system to a Fuji X system . . . but not yet.

So here's hoping for the best.